”Chinese investment Delegation from Baoán visit Bahrain’. The title might immediately suggest that this delegation is traversing the world looking for acquisitions or to set up factories in say Bahrain (as this location is). Wrong! This delegation is out for ‘your’ money – to invest in ‘Baoán District’ in Shenzhen City, which is pretty much visible from your high-rise hotel balcony in Hong Kong, if it was a clear sunny day. Oh hang on! There’s another high-rise hotel blocking your view and clear sunny days are sometimes elusive. Shenzhen and indeed the Baoán District are so well developed with super highways, super trains, super high-rise and super factories, Hong Kong will no doubt become a suburb of it before we can blink. So what are you waiting for?

Actually, come to think of it, as the world becomes more and more accessible and communications so readily instant, almost every country is out there looking for foreign investment, even North Korea one assumes. Shhhh!

On the other hand, the Chinese like Bahrain as it is pretty much an open door for investment as the Economic Development Board (EDB)  and the Chamber of Commerce will tell you. Coming to the Island to set up anything from a cobblers shop to plonking down a multi-million Dollar factory, or even a Dragon City, it can all apparently be done in 60 seconds. Furthermore, it offers 100% ownership in so many cases.

What about China? Chatting to this group, it would seem that a lot of foreign countries are already settled in Baoán and the competition must be immense for foreign investment for any country. For sure there are varying degrees of legislation attached too no doubt.  Well that said, China is baying for it. 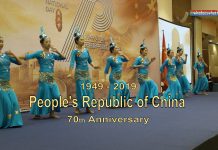